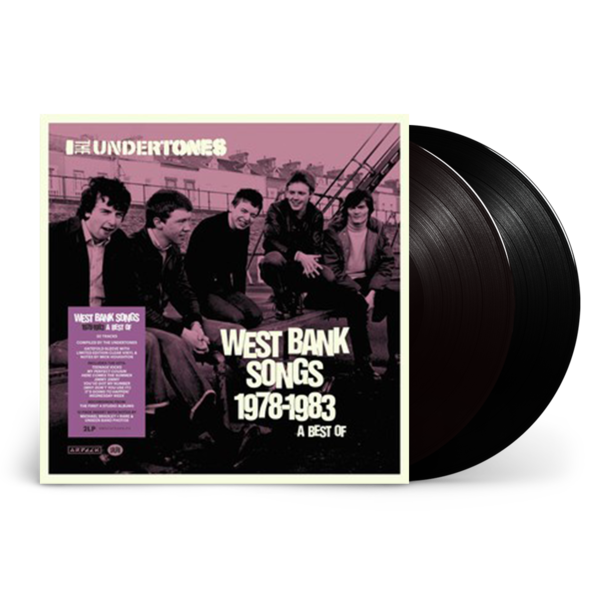 The Undertones formed in Derry, Northern Ireland in 1974 and are one of the most successful bands to have emerged from Northern Ireland. Famously championed by John Peel, who’s favourite all-time track was ‘Teenage Kicks’, they released thirteen singles and four studio albums 1978 – 1983, before Sharkey announced his intention to leave in May 1983. The band re-formed in 1999 with singer Paul McLoone, subsequently recorded 2 new albums and have been touring regularly ever since. They played Glastonbury Festival in June 2005, recently marked their 40th anniversary, and have just completed a 46 date, 2019 world tour. WEST BANK SONGS 1978 - 1983, A Best Of - 30 tracks from 1978-1983, compiled by The Undertones - Features 7 top 40 hits (including 4 top 20s): Teenage Kicks, My Perfect Cousin, Here Comes The Summer, Jimmy Jimmy, You've Got My Number (Why Don’t You Use It!), Wednesday Week, It’s Going To Happen plus the Kevin Shields remix of Get Over You - Tracks from their 4 original studio albums: ‘The Undertones’ (1979), ‘Hypnotised’ (1980), ‘Positive Touch’ (1981) and ‘The Sin Of Pride’ (1983) - 12 page insert with sleeve notes by Undertones bassist Michael Bradley and Mick Houghton, author of the book ‘Fried & Justified: Hits, Myths, Break-Ups and Breakdowns in the Record Business 1978-98’. Also includes previously unseen band photos. - Mastered from HD master sources, under the supervision of Undertones guitarist Damian O’Neill - Sleeve concept by The Undertones, based on The Rolling Stones ‘Aftermath’ cover – an important influence