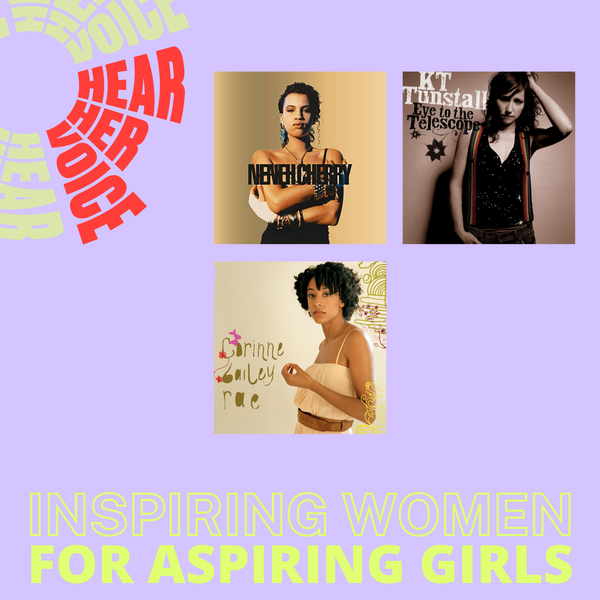 Inspiring Women For Inspiring Girls: Neneh Cherry, KT Tunstall and Corrine Bailey Rae are performers who carry their legacy into the 21st century and beyond. Their positive, inspiring music struck a chord with millions of listeners and their influence can be heard in new generations of performers. Enjoy this selection of some of their greatest work. This bundle contains: Eye To The Telescope: Red Vinyl - KT Tunstall:
An expanded edition of KT’s second studio album ‘Drastic Fantastic’, to be released on 2LP + 10″ coloured LP set. Bonus content includes acoustic versions, live tracks, remixes and b-sides such as Journey which has never been delivered to streaming or released physically in the UK. The bonus 10″ will consist of 4 brand new, unreleased remixes of the album’s singles Hold On, Saving My Face, If Only and Little Favours. Raw Like Sushi - Neneh Cherry:
30th anniversary of Neneh Cherry’s classic hit album Raw Like Sushi (1989),“an unorthodox and brilliantly daring blend of R&B, rap, pop, and dance music”, sees the original album remastered at Abbey Road, pressed on heavyweight vinyl, with download card included. Corinne Bailey Rae - Corinne Bailey Rae:
Reissue of Corinne Bailey Rae’s debut self-titled album originally released February 2006. Debuting at No.1 on the UK Albums Chart and Featuring four top 40 singles such as ‘Like A Star’, ‘Trouble Sleeping’ and ‘Put Your Records On’ which reached number 2, reissued for the first time since 2006 this release also features bonus track ‘Another Rainy Day’. The album was certified triple platinum by the British Phonographic Industry (BPI) and has sold over four million copies worldwide. “Put Your Records On” & “Like a Star” were both nominated for Grammy Awards in 2007/2008 for Record of the Year and Song of the Year.