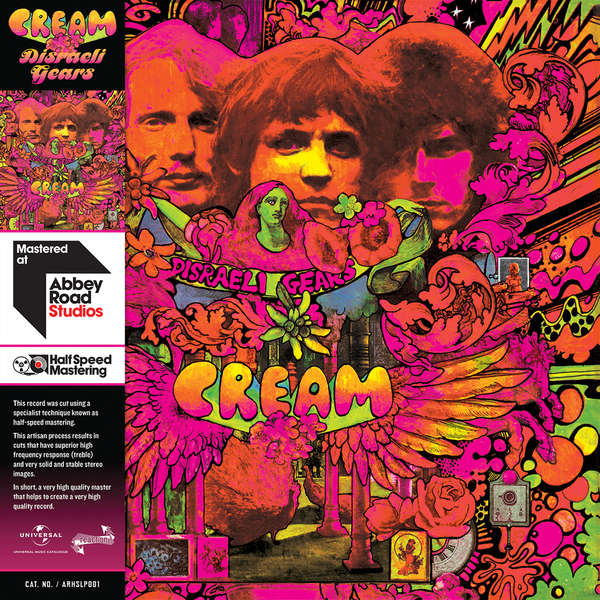 Released in 1967, Disraeli Gears is the second studio album by the first rock ‘supergroup’ Cream (Eric Clapton, Jack Bruce and Ginger Baker) and the name of the album famously came from a malapropism. During a conversation about racing bikes, one of their roadies, a certain Mick Turner, made reference to Disraeli gears instead of Derailleur gears, which was greeted with hilarity and the group decided to use that as the title of the album.

Something of a departure from their blues roots, Disraeli Gears perfectly captured the mood of the period with a powerful array of psychedelic rockers, reached number 5 in the UK Charts and was Cream’s breakthrough release in the US, hitting number 4 in the Billboard 200. It was all recorded in three and a half days at Atlantic Studios, New York, in the presence of Atlantic Records (to whom they were signed in the US) boss Ahmet Ertegun, following nine shows as part of the Music in the 5th Dimension concert series. Their work visas expired on the last day of recording.

The sleeve was designed by Australian artist Martin Sharp, who lived in the same building as Eric Clapton, The Pheasantry in Chelsea. Sharp also co-wrote the lysergic tour-de-force Tales Of Brave Ulysses with Clapton and described the music on the album as a "warm fluorescent sound". His artwork was an attempt to represent this visually and is acknowledged to be one of the finest ‘acid rock’ designs of the era.

The original cut for this record was half speed mastered at Abbey Road Studios.

1.What is ‘Half-Speed Mastering’?

This is an elaborate process whereby the source is played back at half it’s normal speed and the turntable on the disc cutting lathe is running at 16 2/3 R.P.M. Because both the source and the cut were running at half their “normal” speeds everything plays back at the right speed when the record is played at home.

2.What are the advantages of Half-Speed Mastering?

The vinyl L.P. is an analogue sound carrier. Therefore the size and shape of the groove carrying the music is directly related to whatever the music is doing at any particular point. By reducing the speed by a factor of two the recording stylus has twice as long to carve the intricate groove into the master lacquer. Also, any difficult to cut high-frequency information becomes fairly easy to cut mid-range. The result is a record that is capable of extremely clean and un-forced high-frequency response as well as a detailed and solid stereo image.

3.Are there any dis-advantages?

Only two, having to listen to music at half-speed for hour after hour can be a little difficult at least until I get to hear back the resulting cut when it all becomes worthwhile. The other dis-advantage is an inability to do any de-essing. De-essing is a form of processing the signal whereby the “sss” and “t” sounds from the vocalist are controlled in order to avoid sibilance and distortion on playback. None of the tools I would ordinarily employ on a real-time cut work at half speed as the frequencies are wrong so the offending “sss” does not trigger the limiter and everything is moving so slowly there is no acceleration as such for the de-esser to look out for. This has always been the Achilles heel of half-speed cutting until now (see below).

4.What was the source for this record?

Digital transfers made from the original ¼” MONO masters (with edits) from Atlantic Studios NYC, 1967 - transfers were made at Sterling Sound, NYC, in 2013 This album was cut from a high-resolution digital transfer from the best known analogue tape in existence. Only minimal sympathetic equalisation was applied to the transfer to keep everything as pure as possible. Also, as this was an analogue, vinyl only high quality release, I did not apply any digital limiting. This is added to almost all digital releases to make them appear to be loud and is responsible for “the loudness war” and in almost every case is anything but natural and pure sounding.

5.Why could it not be cut ‘all analogue’?

The biggest variable when cutting from tape is the replay machine. Every individual roller in the tape’s path will have a direct effect on the quality of the audio emanating from the machine. In addition to this, there is the issue of the sub 30Hz low-frequency roll off on an advance head disc-cutting tape machine which in effect will come into play at 60 Hz when running at half speed. In addition to this, there are also some unpredictable frequency anomalies in the 35-38 Hz region with analogue tape that will double up at half speed. These are all problems if you want to hear as originally intended the lowest register of the bass end on a recording. There is also the lesser potential problem of tape weave that effectively increases at lower speeds and leads to less high frequency stability and the possibility of minor azimuth errors. Even if these problems could be overcome, the source tapes for this album are held in an archive in America. The days of shipping precious analogue masters over the Atlantic are long gone. Even if Universal were to break their internal no overseas shipping rule, it would be close to impossible to get insurance cover for the tapes. Also analogue tape becomes degraded with each pass over the replay heads. These tapes are getting old and it is no longer considered good practise to play and play and play precious old original masters for fear of wearing them out. I can completely understand the reasons for the concerns that some people have when cutting classic albums from digital sources. Historically, there have been some horrible digital transfers used as a vinyl cutting source. This has absolutely not been the case with this series. Micro-management of the audio and attention to detail has been the order of the day.

6.Are there any advantages to this working method?

Yes, any problems with the tape can be treated far more accurately digitally than they could be by using traditional analogue techniques. For example de-essing. I can, by clever editing, target just the offending “sss” and leave intact the rest of the audio. Therefore high-hats, bright guitars and snare drums are not affected or reduced in impact. Using an analogue scatter-gun de-esser approach would also trigger the limiter in many parts of the audio that do not need to be worked on. The de-esser cannot tell a bright guitar from bright vocal and will smooth everything out leading to dull guitars or soft snare drums and weak hi-hats. Targeting the “sss” sounds in the vocal as I have done in this series is time consuming but is worthwhile in the pursuit of the very best possible sounding record. Also if there was any damage to the analogue tape (drop-outs and clicks for example) this can by and large be restored using modern digital methods in a way that is unobtrusive and this would be impossible using analogue methods. For the record, none of the albums in this series have been de-noised. Only clicks and drop-outs have been repaired. 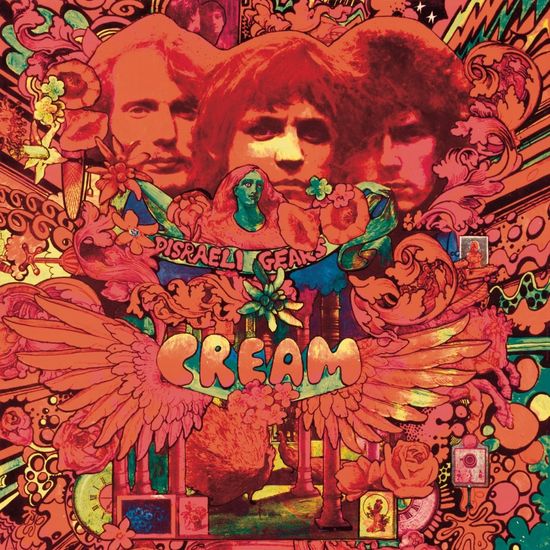 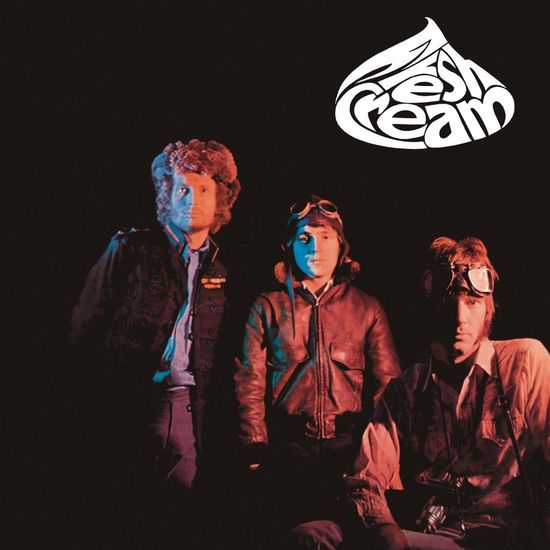 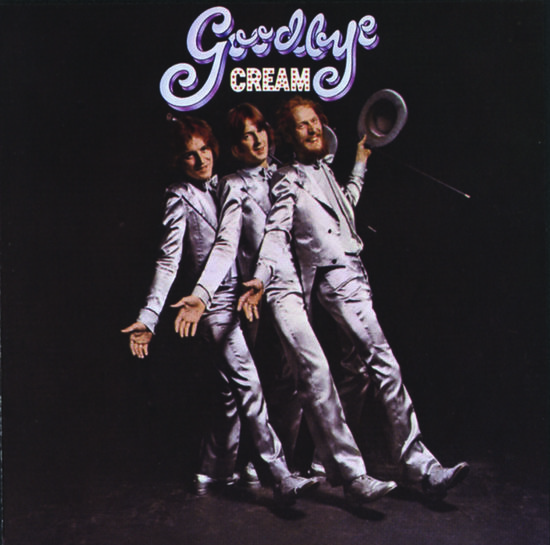 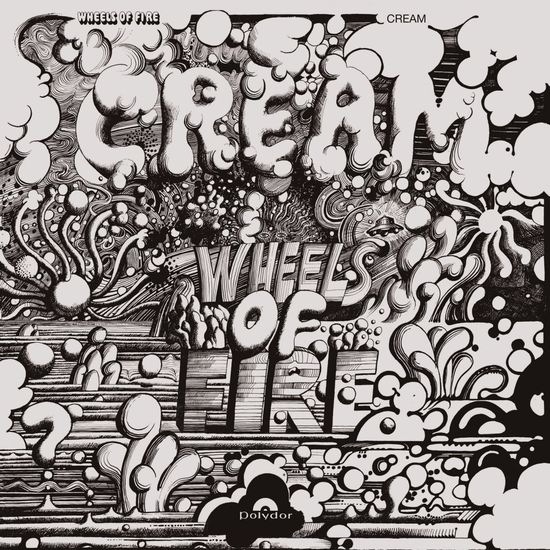 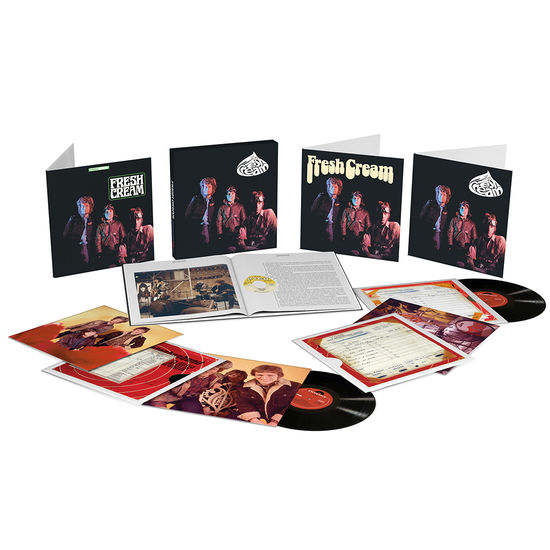 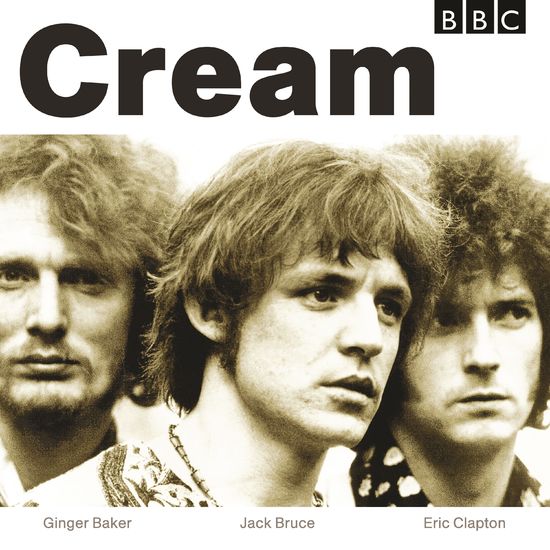 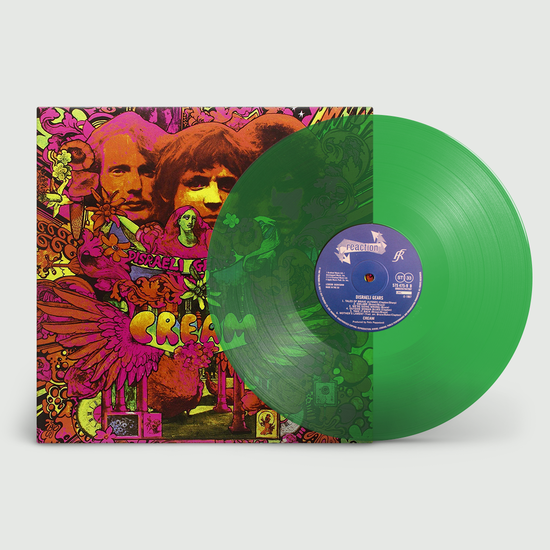